The average tax paid by individuals around the world when purchasing a new home has now reached almost 5%, with some major economies charging more than 10% shows a new study by UHY, the international accountancy network.

UHY’s study shows that the average tax charged worldwide on the purchase of a home worth USD150,000 has now reached 4.51% - a cost of USD6,771 even for a relatively modest home (see table below).

The average tax paid on a home purchase has risen quickly in recent years. A previous study of property taxes by UHY, in 2013, found that G7 countries charged an average of 2.29% tax on the purchase of a home worth USD150,000. This has now risen to an average of 3.57% in 2020.

However, the impact of coronavirus on property prices worldwide may force more countries to make emergency cuts to taxes on housing purchases to keep property transactions moving. The UK was recently forced to make a temporary cut to property transaction taxes in an attempt to revive the market.

UHY says that more countries could now look at making similar cuts, especially if the UK’s reforms prove successful in reviving the market.

UHY says that property transaction taxes are often seen by Governments as an attractive tax to cut when seeking economic stimulus. While they make up a relatively small proportion of overall tax receipts compared to major taxes like income tax and VAT, residential property transactions create broader economic activity such as spending on refurbishment and white goods when people move home.

UHY says that in the longer term the cost to Governments worldwide of the coronavirus pandemic could result in pressure to increase property taxes. A combination of lower tax revenues and expensive economic stimulus measures will leave many countries with major budget deficits that will need to be addressed.

It adds that while increasing property taxes may be an attractive source of revenue for governments, discouraging property purchases can reduce labour market mobility as there will be a tax charge each time a property owner moves and buys a new home.

High property taxes can also distort the market by discouraging older homeowners from downsizing as this would result in a tax charge on the purchase of their new smaller home. Some commentators have also argued that high property taxes disincentivise homeowners from selling properties when housing markets overheat and buying again once prices have fallen. This removes a key mechanism for preventing property bubbles forming.

Dennis Petri, Chairman of UHY International, says: “Taxing property purchases is one way to increase tax receipts to address the costs of coronavirus. However, that could hit ordinary people the hardest on what is likely to be the biggest investment they will ever make.”

“It has been argued that raising property taxes helps to deflate property bubbles, but their track record in doing that is patchy at best. They also make it more difficult for people to move to areas where their skills are more in demand, impacting economic productivity.”

UHY tax professionals studied tax data for individuals purchasing a house worth USD150,000, USD1 million and USD2 million in 27 countries across its international network, including all members of the G7, as well as key emerging economies.

UHY’s findings show that Spain is the developed economy with the highest levels of taxation on property purchases, levying 14.85% on a purchase of a property worth USD150,000, and 13% on properties worth USD1 million and USD2 million.

While the Spanish government has set the national rate of property transfer tax at 7%, many provinces have much higher rates – up to 11% in some cases. When Stamp Duty and other local taxes are added, the overall tax bill can be close to 15% in some regions.

Belgium is the second-highest developed economy for property taxes in UHY’s study, averaging 11.66% nationwide - although homebuyers in Brussels and Wallonia pay even more, at 12.5%. Japan also levies very high property transfer taxes, applying its 8% consumption tax (equivalent to VAT) on all residential property purchases. This is in addition to a real estate acquisition tax of 3%.

UHY’s study shows that since the Chancellor raised the Stamp Duty threshold in the Summer Budget, a homebuyer in the UK pays just USD19,300 in Stamp Duty on a purchase of a home worth USD1 million, compared with a European average of USD45,294 (see table below). The effective Stamp Duty rate was 3% before the emergency cuts.

The cut to Stamp Duty, which will last until the end of March 2021, is aimed at stimulating the residential property market following a sharp drop in transactions during the coronavirus outbreak.

UHY explains that although the Stamp Duty cut will help ordinary people buying lower-value properties, it does leave buyers of properties worth USD 2 million and up paying more tax in the UK than in most other countries. Homebuyers of a property worth USD 2 million still pay 5.78% in Stamp Duty, putting the UK ahead of Germany (5.38%) and Italy (0.63%) and an average for the US of 0.39%.

“The newly announced cut to Stamp Duty is an encouraging sign for the housing market and should boost property purchases and the associated economic activity.” Says Andrew Snowdon, Partner and Head of Tax at UHY Hacker Young in the UK.

United States among the most generous to USD2 million homebuyers

UHY’s study shows that rates of tax on a purchase of a home worth USD2 million across the United States average just 0.39%, while Russia levy no tax at all on purchases of residential property, regardless of value.

Italy also charges less than 1% tax on the purchase of a USD2 million home. These figures are far lower than the average rate charged in G7 countries (4.49%) or in the BRICs economies (3.56%).

UHY explains that low property taxes can act as a significant attraction for high net worth individuals, ensuring that key creators of employment, especially in emerging economies like Russia, are less likely to move overseas.

Nikolay Litvinov, Director of Audit and Consulting at UHY Yans-Audit in Russia, says: “Russian property buyers continue to benefit from the most buyer-friendly tax regime in the world. That goes for both ordinary families buying their first home, and for high net worth individuals purchasing luxury property.”

All 27 countries ranked by the amount and the percentage of tax paid on a purchase of a USD150,000 property – Spain, Bangladesh, Belgium and Japan all above 10% 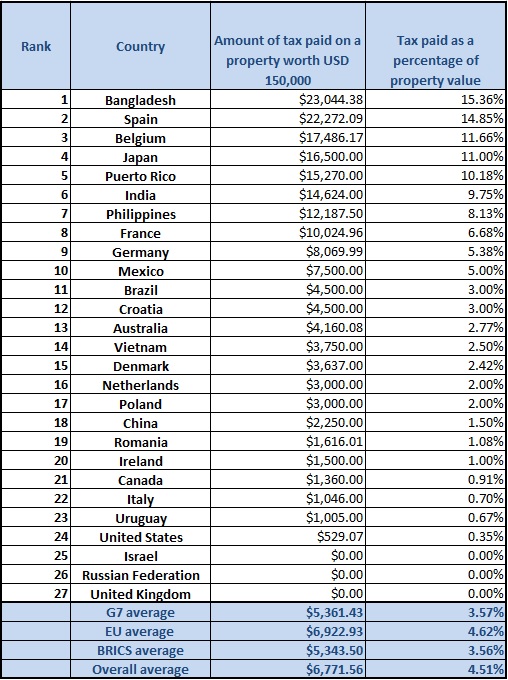 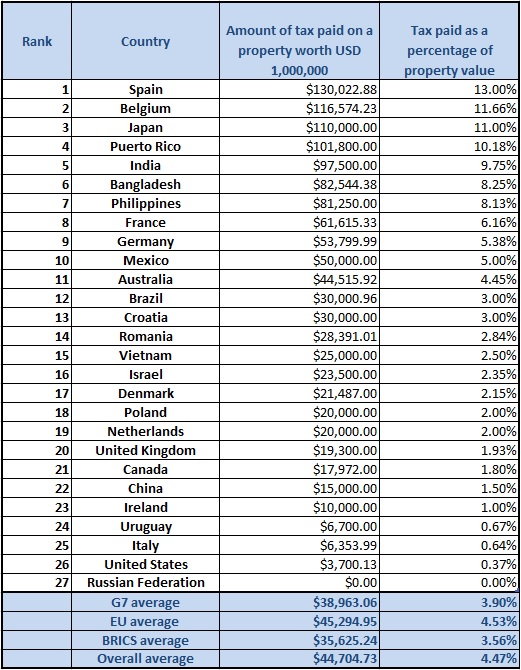 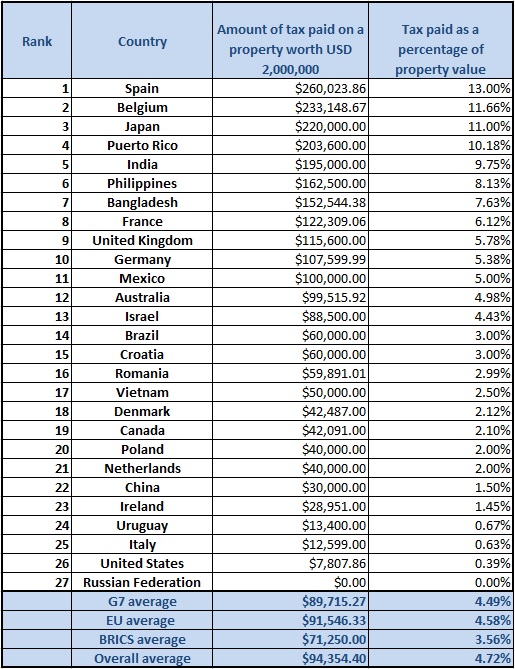