Germany has seen the world’s fastest growth in electric car sales of all major economies * during the pandemic, with sales more than trebling to 194,000 cars in 2020, up from just 63,000 in 2019, shows a study of electric car sales worldwide by UHY, the international accountancy network.

Worldwide growth in sales of electric cars has outpaced global car sales (including petrol and diesel) which fell by approximately 15% to 64 million in 2020, down from 75 million in 2019***.

Less than a fifth (19%) of countries in UHY’s study saw sales of electric cars fall during the first year of lockdown.

UHY says that Germany has begun a programme of heavy investment in electric vehicle charging infrastructure in order to achieve its target of having 10 million electric vehicles and one million charging stations on German roads by 2030. The country also has generous tax breaks and incentives for purchases of electric cars and charging points. New electric cars priced at less than 40,000EUR benefit from a Government rebate of 9,000EUR, while the state-owned development bank offers a 900EUR grant for the installation of a private electric car charging point.

UHY Wahlen & Partner, says that the launch of several new and updated mass-market electric vehicles in the last year, including the Volkswagen ID.3 and e-Up! has triggered a new wave of sales in Germany. Battery electric cars made up 10% of all new cars sold in Germany in 2020, with fossil fuel-powered cars falling to a 78% share of new car sales.

Dennis Petri, Chair of UHY, comments: “The electric car revolution has picked up a lot of speed worldwide in the past year, despite the effects of the pandemic. Germany is a country with a long history of automotive innovation and it looks like it will again be part of the vanguard in making electric cars a part of everyday life.”

“Many governments around the world have helped to drive the electric vehicle transition through providing subsidies for consumers who purchase EVs. Along with investing in the public charging infrastructure necessary to support electric cars, this is the biggest step governments can take to accelerate a large-scale switch to EVs.”

Thomas Wahlen, Managing Partner at UHY Wahlen & Partner, comments: “Manufacturers and the Government in Germany have both invested a great deal in accelerating the German transition to electric vehicles and they will be hoping this growth rate continues for several more years.”

However, China remains by some distance the largest national market in the world for electric cars, with more sales than the next four largest markets combined. Sales of electric cars in China are heavily incentivised by programmes including Beijing’s ‘licence lottery’, which limits the city’s 22 million residents to only 40,000 new petrol cars per year to lower congestion and pollution.

US and Japan both saw electric car sales fall in 2020

Dennis Petri adds: “Electric cars in the US are still generally confined to the east and west coasts – that’s thanks to the incentives offered by state governments in places like California, New York and New Jersey. Car buyers in the rest of the country would benefit from more states following suit.”

Morito Saito, Director at UHY FAS Ltd, UHY’s member firm in Japan, comments: “Japanese car manufacturers still have a relatively limited offering when it comes to battery electric cars even though they were very early adopters of hybrid technology. While some manufacturers in Europe are already implementing plans to produce only electric vehicles, that has not yet happened in Japan.” 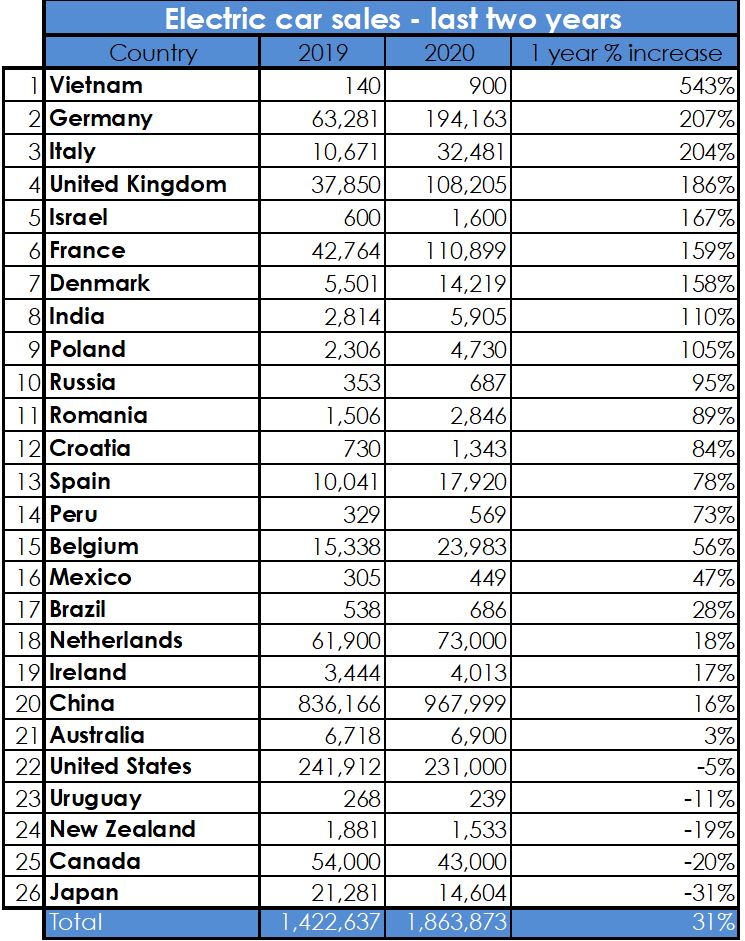