There is pressure on governments worldwide to cut taxes to help the tourism industry, with a new study by UHY, the international accountancy network showing that Covid-driven cuts to tourism taxes have so far reduced a tourist’s typical daily spend on tax by just 1%, from 15% to 14%.

In its study covering 25 countries, UHY measured the tax paid on a number of everyday purchases by tourists – one night in a four-star hotel in a major tourist city (USD150), a meal for two in a restaurant (USD75) and a bottle of wine (USD30).

UHY’s study found that while the UK, Ireland, Germany and China have been quick to make significant tax cuts to aid the tourism industry, 21 of 25 countries in the study have not yet made any cuts. The firm says that governments should consider accelerating tax cuts to help their tourism economies.

Temporary cuts to Value Added Tax (VAT) and other sales taxes for the tourism industry during the pandemic have caused the UK’s average tax on typical tourist spending to reduce from 21.1% to just 7.8%. This saw the UK fall from the third-highest of 25 countries for tourist taxes pre-Covid, to 21st today.

UHY says that there is significant scope for central and local governments around the world to stimulate demand for tourist businesses by cutting taxes on consumption, alcohol duties and local taxes in tourist cities.

Even in the countries that have cut taxes on tourism, extensions will almost certainly be needed until the sector begins to recover. The UK’s 5% VAT rate for the leisure and hospitality sector is set to expire and return to 20% at the end of March 2021, while China’s zero VAT rate ends on December 31 2020. Germany has already announced that its temporary 7% VAT rate will not return to its usual 19% until July 2021. Ireland has temporarily cut its VAT rate for hospitality and tourism businesses from 13.5% to 9% until December 2021.

The tourist industry has been among those worst-hit by Covid, with restrictions on travel set to continue for at least several more months. The International Civil Aviation Authority reported in May that the pandemic is likely to have reduced air passenger numbers by 1 billion by the end of September 2020. This has caused substantial knock-on effects for sectors including hotels, restaurants and visitor attractions.

Dennis Petri, Chair of UHY, says: “The tourism industry is critically important in a huge number of economies and many governments could do more to help it through one of the most difficult periods it has ever faced.”

“A few countries have done their level best to jump start their tourist economies, but tourism businesses worldwide are still crying out for assistance. With Covid still a major issue globally and travel restrictions set to stay in place for months yet, time is running out to help some of these businesses.”

“While normalising travel might not yet be possible for most countries, cutting the tax burden on tourism businesses could be done very quickly. Even where that has been done already, it will likely need to be extended.”

“This is not only a national government issue – local and regional governments could also do more to help. Many tourist cities levy specific taxes on hotel rooms and suspending those charges for a period would lift a little more of the burden from tourists and the hospitality industry.”

UHY says that Europe (11.3%) has lower taxes than the global average on tourism. Some European countries that rely relatively heavily on their tourism industries have among the lowest tourist taxes in UHY’s study, including Spain (10%) and France (11.6%). 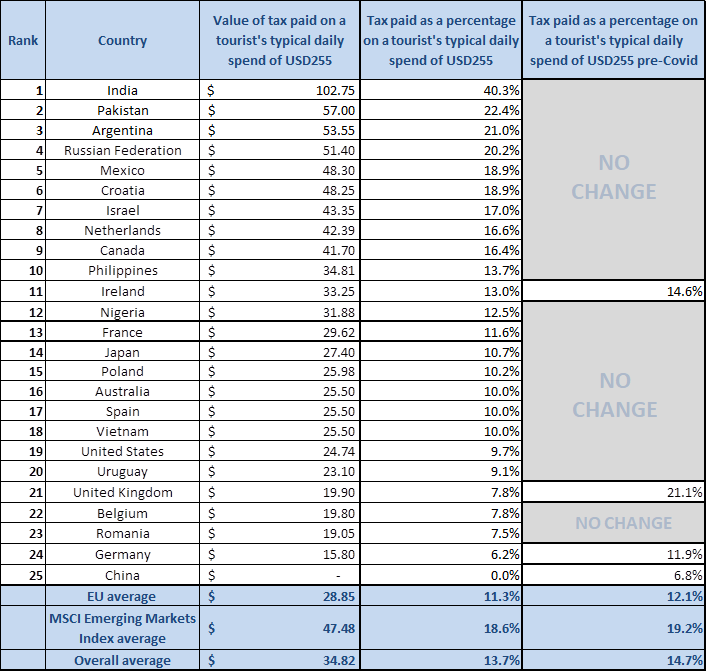