China saw the number of new businesses it created grow by 1.25 million in 2020, giving it first place among 22 countries in a study of new business creation around the world during the Covid-19 pandemic by UHY, the international accountancy network.

UHY’s study shows that over 25 million new businesses were created in China in 2020, up 5% from the over 23.7 million created in 2019. Since 2015, the Chinese government has signalled a focus on entrepreneurialism in China by repeatedly emphasising its role in the country’s economic strategy. In November 2020, the government also stressed the key role to be played by small businesses in driving China’s recovery from the pandemic.

Liqian Sun, Director at Zhonghua CPA LLP, UHY’s member firm in China, comments: “China has made significant strides in fostering entrepreneurialism over recent years and the pandemic has not been able to slow that. Enterprise has been a key element of China’s economic strategy over the last five years and these figures show how that approach is bearing fruit. There are an astonishing number of microbusinesses being created every year in China.”

UHY says that Covid-19 has triggered a wave of entrepreneurialism in many countries including the US as people were forced out of work or furloughed due to the effects of the pandemic. Industries such as online retail have seen particularly strong surges in new business registrations as consumer behaviour was forced to change by lockdown restrictions.

This increase in new business creation is also likely to have been influenced by greater availability of business lending during 2020.

Dennis Petri, Chair of UHY International, comments: “The surge in new business creation in the United States over the past year has been remarkable. Some of this will be down to necessity – people losing jobs and striking out on their own due to a lack of other options. But much more will be entrepreneurs seeing opportunity amid the disruption of the pandemic, particularly in online retail.”

Nine countries of 22 in the study saw significant increases in new business creation in 2020 compared to 2019, including major economies such as the United Kingdom, France, Brazil and India. The largest percentage increase was seen in the Philippines, where new business creation grew 152% in just a year.

Michael Aguirre, Founder at UHY M.L. Aguirre & Co, UHY’s member firm in the Philippines, comments: “2020 saw a huge number of registrations of new online businesses in the Philippines. Our economy is rapidly digitalising and that is creating greater opportunity for entrepreneurs. The money made available to businesses through government-backed loans has also been helpful to many.”

“The next challenge is to lower costs and red tape for new businesses in the Philippines. If that can be achieved, we can create an even more vibrant startup economy.”

Adds Dennis Petri: “As the Covid recovery accelerates, economies worldwide need new business creation to drive economic growth. European governments should be looking at their tax policies to ensure they are doing everything they can to empower entrepreneurs to grow new businesses, create employment and increase their tax base.”

UHY says that the United Kingdom was among the countries to see the fastest rise in new business creation during the pandemic, with a 14% increase in new businesses started in 2020 compared to 2019. It adds that data from the country’s tax authority show that more new businesses were created in March 2021 than in any month on record.

Martin Jones, Partner at UHY Hacker Young, UHY’s member firm in the UK, comments: “Entrepreneurs in the UK have really used the pandemic and lockdowns as a springboard to start businesses. Covid-19 has created opportunity for people brave enough to identify and capitalise on the huge change we have seen over the last 18 months.”

“We now look back on the last recession as a period where many of the UK’s leading tech and fintech businesses were started. In a decade it’s likely we will see the pandemic period as a similarly crucial period for entrepreneurialism.” 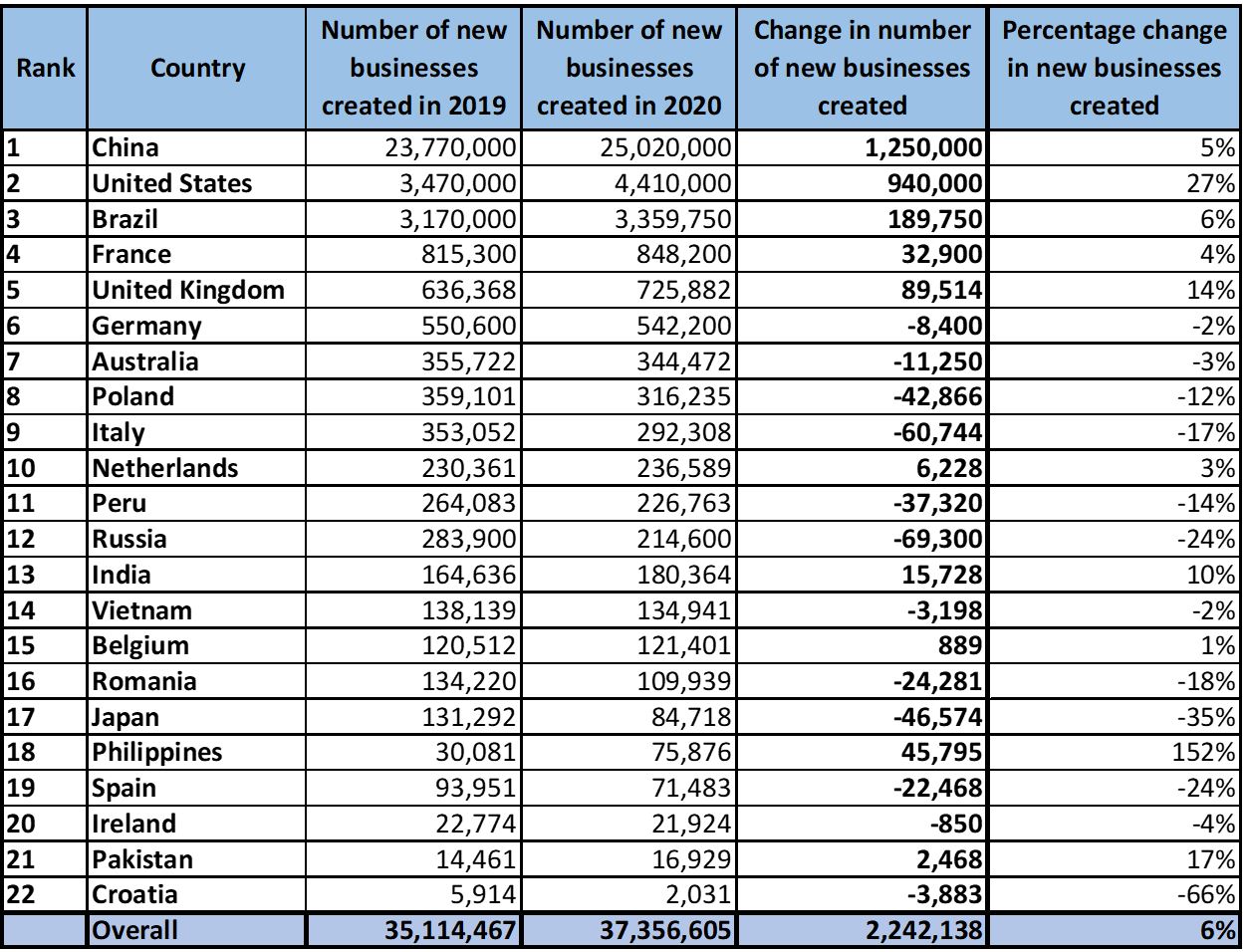